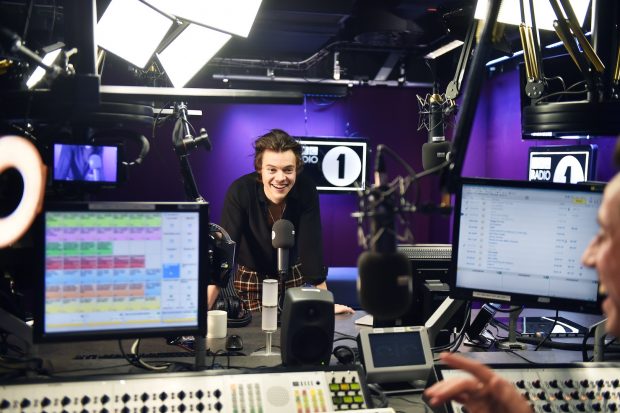 Did One Direction star boy Harry Styles’ recent teasing of some album artwork leave you with far more questions than answers? Like, what will his new sound be? Will there be any guest features? Will he fully embrace his rock gawd-young Mick Jagger birthright? Well, stop what you’re doing and set a reminder for 8am UK time wherever you are because you’re not going to want to miss this: Harry will not only co-host the Radio 1 Breakfast Show, but finally debut his first single, ‘Sign of the Times’ this Friday, 7th April.

BBC Radio 1’s Nick Grimshaw will be talking exclusively to Harry Styles about dating, his debut single, his 21st birthday gift from Adele in the broadcast going out tomorrow, but you’re in luck – we’ve got a preview for you below.

Whether he’s spoken to Adele about his new record, and if she’s offered any advice

“I’ve spoken to her a little bit, she knows one of the guys that I wrote it with (his music) a lot. But I don’t think so much advice, I just like how she does stuff. I think she leads by example, she’s the biggest, she’s amazing she’s the best so she should be the biggest. The thing with her is she’s a different thing, she’s just good at it, I like how she does everything, it looks very nice.”

On what inspired his writing for the album

“I think it’s hard to not have influencers from what you grew up listening on. I think everyone reacts differently to different types of music. I was with the guys who I was writing it with and we just wanted to make what we wanted to listen to and that has been the most fun part for me about making the whole album. In the least weird way possible, it’s my favourite album to listen to at the moment… I think if you put out something that you don’t stand behind and really love…then if it doesn’t go well then you could regret not doing what you wanted to do. Whereas if nothing happens with it, I love it you know so I think that’s what you should do. I think that’s been my favourite part to the overall thing is listening to the album and making all the changes – it has been fun to watch over it all.

“I think a lot of people, especially at labels separate it because they work in music that it’s a broader understanding of music than people who are listening… I think we are all fans of music and I think we made it as the fan… I hope we did a good job but I really like the album so I hope people like it.”

Talking about writing the album in Jamaica

“We wrote most of the album in Jamaica, I was in Jamaica for two months. I just wanted to not be somewhere that I’d get distracted. It was 360 of writing, you’d go home for dinner, write at the house then go back to the studio. I liked being away from everything and doing it like that.”

On how much thought goes into the stuff post-album

“You finish the album, and think thank god for that, then oh no, now I’ve got to do all of the other stuff – I’ve not done it like this before, being across absolutely everything. But it’s been good, really fun… Yeah, that’s when you feel like you’re adminy, then you realise how particular you are about fonts, you didn’t think you were bothered about fonts… People that email in red – why?”

If it’s hard to stay grounded

“It’s easier in the way that I like to separate stuff from working and being at home with family and stuff. When you separate it it’s easier to see it for what it is. When you let it become everything and that’s your whole life, then it’s easy to get a bit lost in it. I’m lucky, I have amazing friends and my family’s amazing so I think they make it easier to keep the separation between the two which makes it easier for me.”

Hear the full co-host and world premiere of Harry’s debut single 8am on Friday, 7th April 2017 on the Radio 1 Breakfast Show.

Listen on BBC Radio 1, via mobile, and the BBC iPlayer Radio app. Embeddable highlights will be available on Radio 1’s YouTube channel. Here Harry Styles’ single ‘Sign of the Times‘.